It had been so long since we last camped, I had forgotten that you really get back to basics with your circadian rhythm. Or maybe it’s because we have a toddler with us who is used to sleeping in a pitch black room? Anyhow, we were up at first light which gave us time to explore the campsite (including the playground) and to catch the 8:45am bus to Salamanca. Now, that might not sound very early, but bearing in mind that we normally take until at least 10am to get mobilised at weekends we felt fairly chuffed with ourselves.

The bus ride into Salamanca was interesting – we drove through various residential suburbs (the houses were so different in build to the ones we’re used to in the south) picking up folk on their way to work in the city.

Our first stop was Rua Mayor Café/Restaurante, on Calle Rúa Mayor, for some breakfast. The service was poor, the breakfast standard (croissants / toast / coffees / natural orange juice), but the ambience pleasant. It fuelled us up for a bit of exploring of the city.

We ventured to the impressive Plaza Mayor, onto the central market (not as big as the one in Malaga, but a good selection of food) and then onto the very impressive cathedrals (there are 2 – the old and the new) & Universidad Civil.  Hidden behind the old cathedral was the lovely “Huerto de Calixto y Melibea”, a tranquil garden with great views of the cathedrals and city.

Lunch was at the alternative (well, compared to the eateries we’re used to on the Costa del Sol anyway) Café Mandala, where we had 3 courses for 10.50EUR. The food was really good – tasty and good portion size. The service was good too as was the ambience. A hit all round.

At this point we were feeling the effects of the heat and being on our feet all day, so we headed back to the campsite for a rest and then a refreshing swim in the outdoor pool.

We were really charmed by Salamanca. It felt like it had a personality and was easily explored with a toddler & pram in tow. In our current state, one night was enough, but had we been child free we might have stayed longer to experience the city in the evening too.

Where to next? We know we want to get as far north as possible, but haven’t yet decided on a destination. We’ll do that en route, tomorrow. 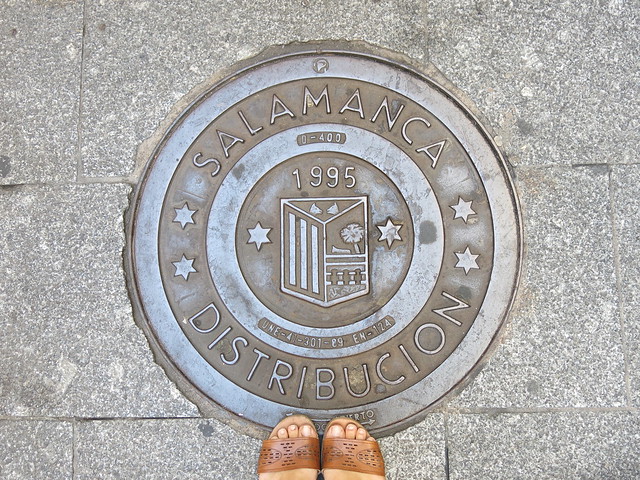